Views From the Rigg 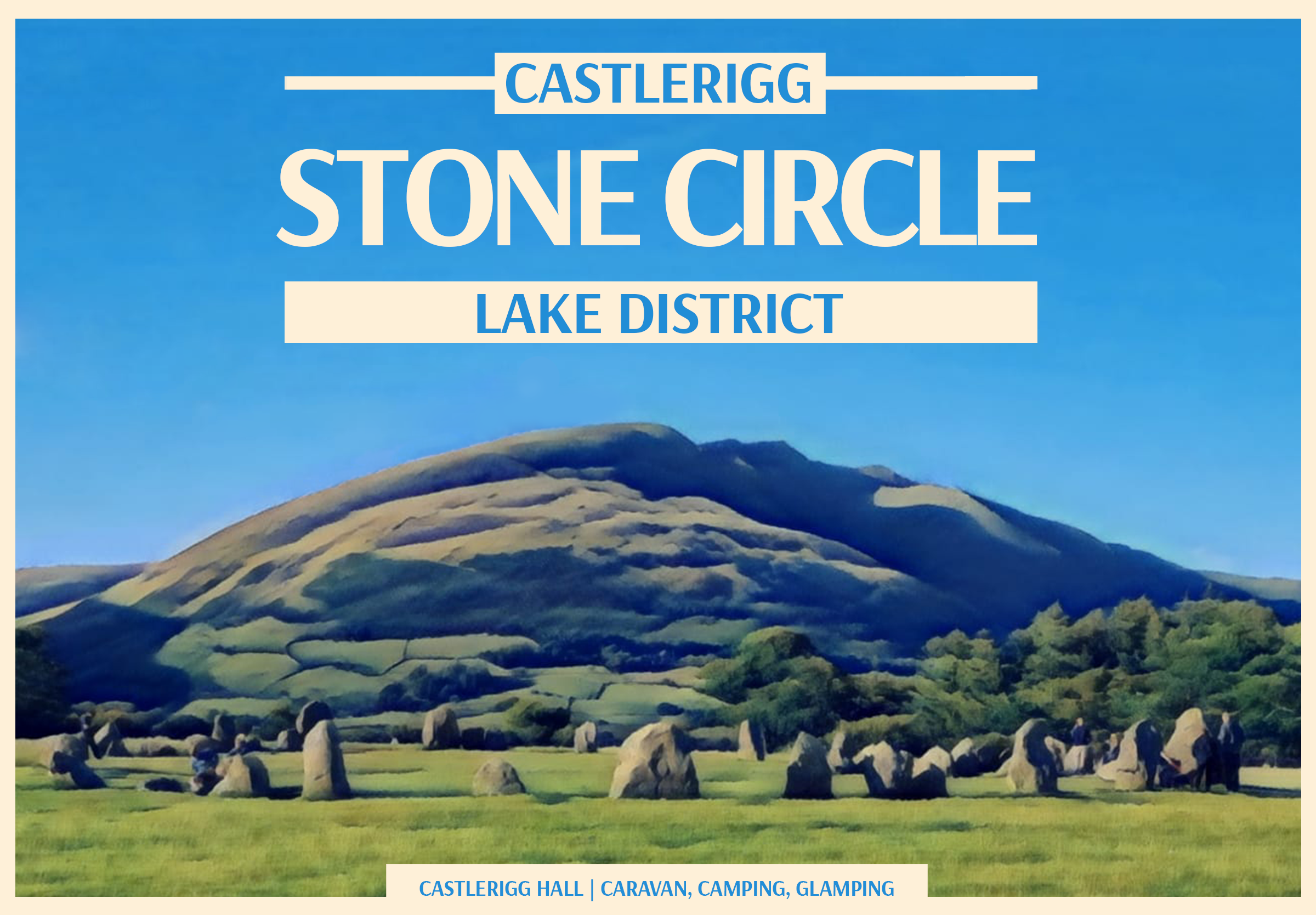 Article and imagery by David Jackson of Castlerigg Hall

Castlerigg Stone Circle is a must-visit on any trip to Keswick. Both for its 4500-year-history and also for its stunning setting with panoramic fell views including Skiddaw, Catbells and Blencathra.

The best way to see the stone circle? To walk there of course! Below, I’ve written up full walking directions, complete with photos of every step of the way and a sprinkling of my local knowledge.

It’s perfect for those who prefer less elevation, circular routes and shorter walks. The whole loop from Castlerigg Hall to the Castlerigg Stone circle should only take 2 hours including plenty of time to explore the stone circle itself. (If you are looking for a little more challenging walk from Castlerigg, I’d recommend Walla Crag)

WALK MAP FROM CASTLerigg Hall to the Castlerigg Stone circle 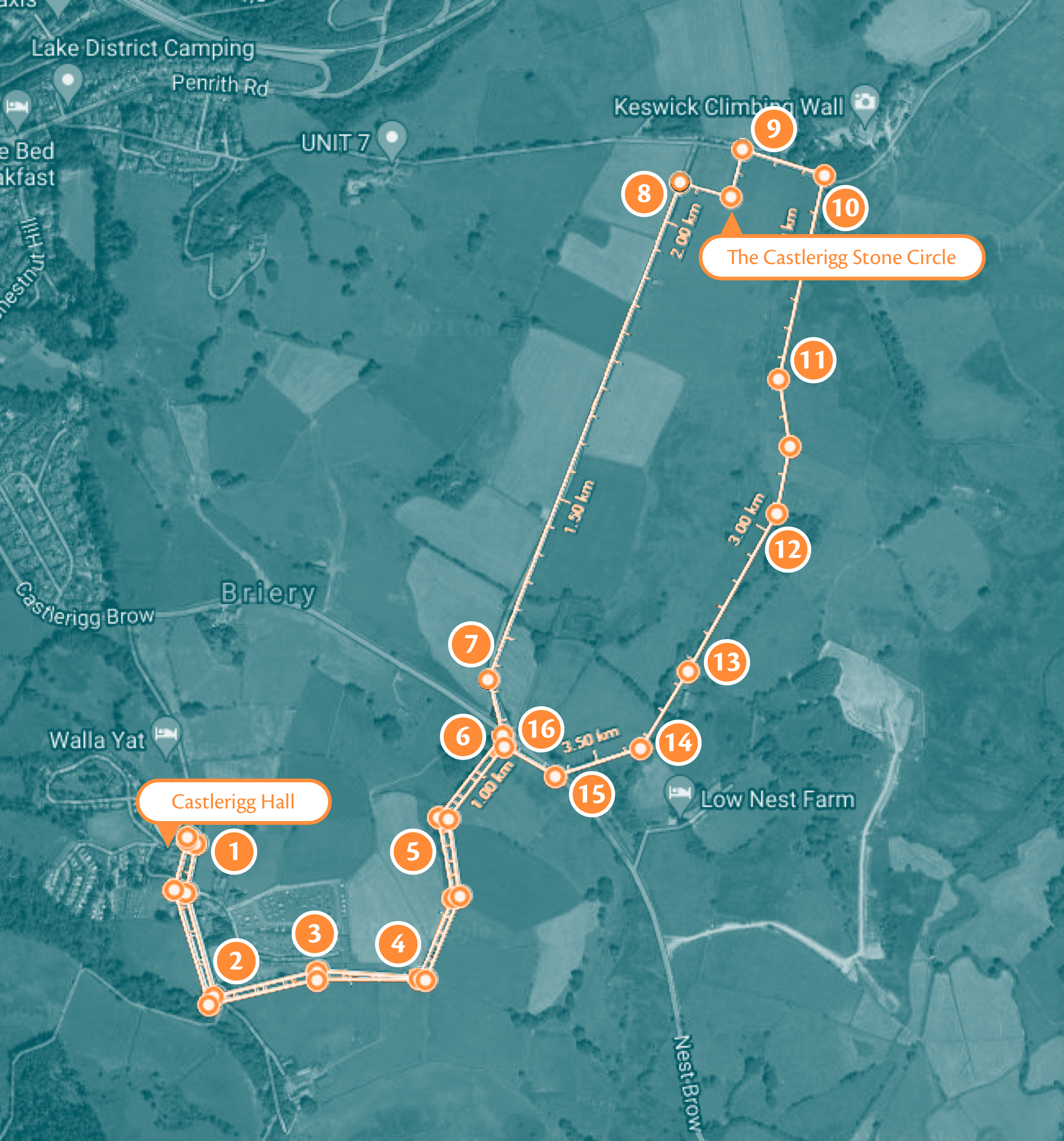 2. Start to follow the lane up past Castlerigg Farm. Keep going until you reach a gate on the left.

David’s Notes: If you look right (past Castlerigg farmhouse), you’ll see the wonderful views across Derwentwater with Grisedale Pike and across to Causey Pike and Barrow. In the field, you may even spot fell ponies with their foals. 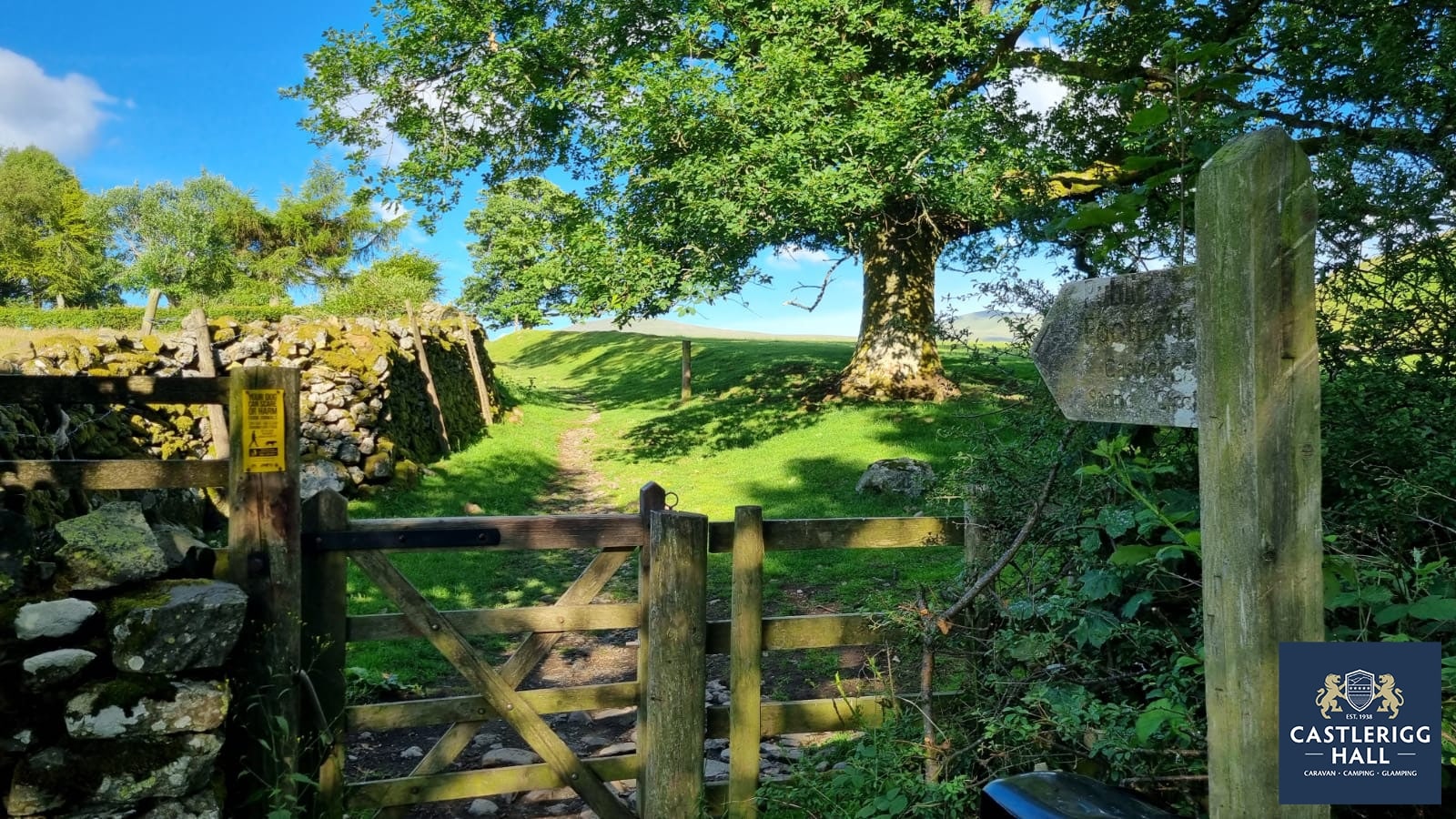 Please remember to shut the gate behind you and keep your dogs on a lead, as you’re now heading into agricultural land with livestock

3. Go through the gate and follow the wall on your left, with the campsite on the other side of the wall. The footpath is easy to follow as it’s in a depressed sort of hollow. You’ll then pass through another gate but just continue along the same route. 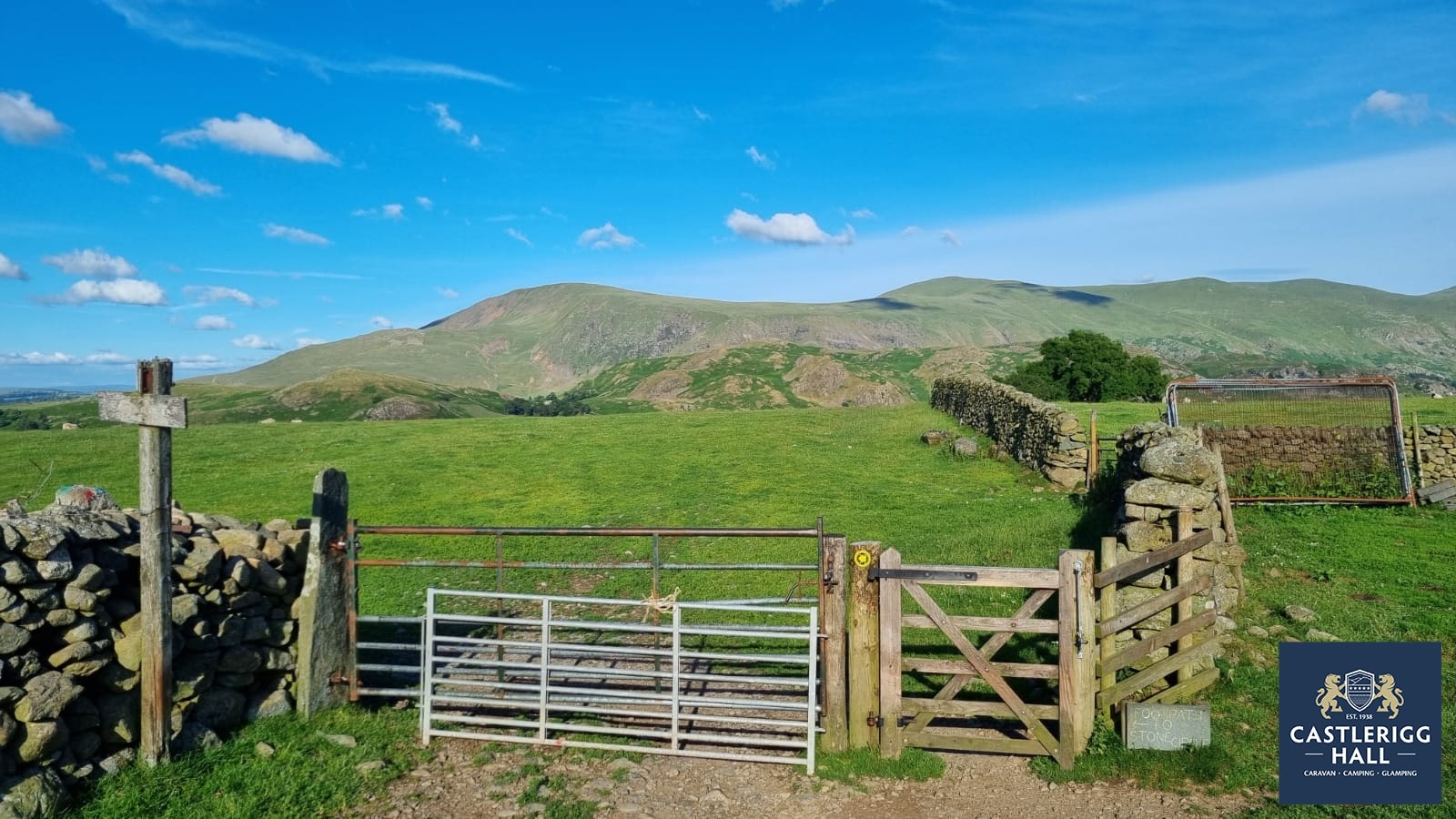 After passing through this gate, take a sharp left

4. You’ll very shortly come to another gate (pictured above). At this gate, you need to take a sharp left and begin to follow the path along the wall for the next few fields. You will pass through another 2 gates but as long as you keep the wall/fence to your left, you’re going the correct way! 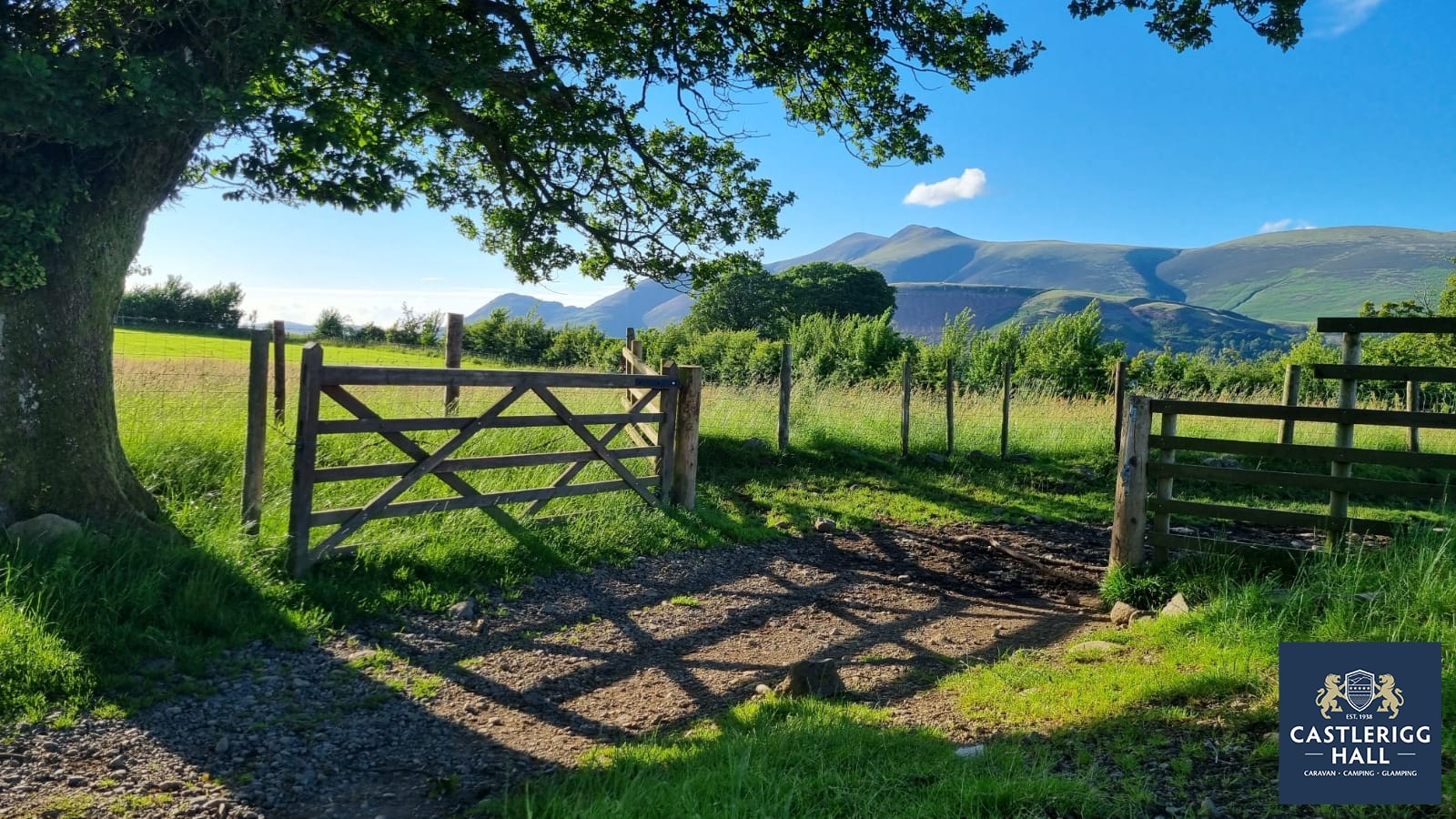 5. Go through the 4th gate and follow the path which leads towards the main road. You can continue along the path or walk along the sunken ditch section to the left.

David’s notes: A little bit of local knowledge from when I was a lad – I always remember a sign up here that said ‘Coopers Dyke’. Now that name is long-lost, and the sign disappeared 30 or 40 years ago. But I still wonder why the dyke is called ‘Coopers Dyke’ and why it’s all been excavated and dug out. 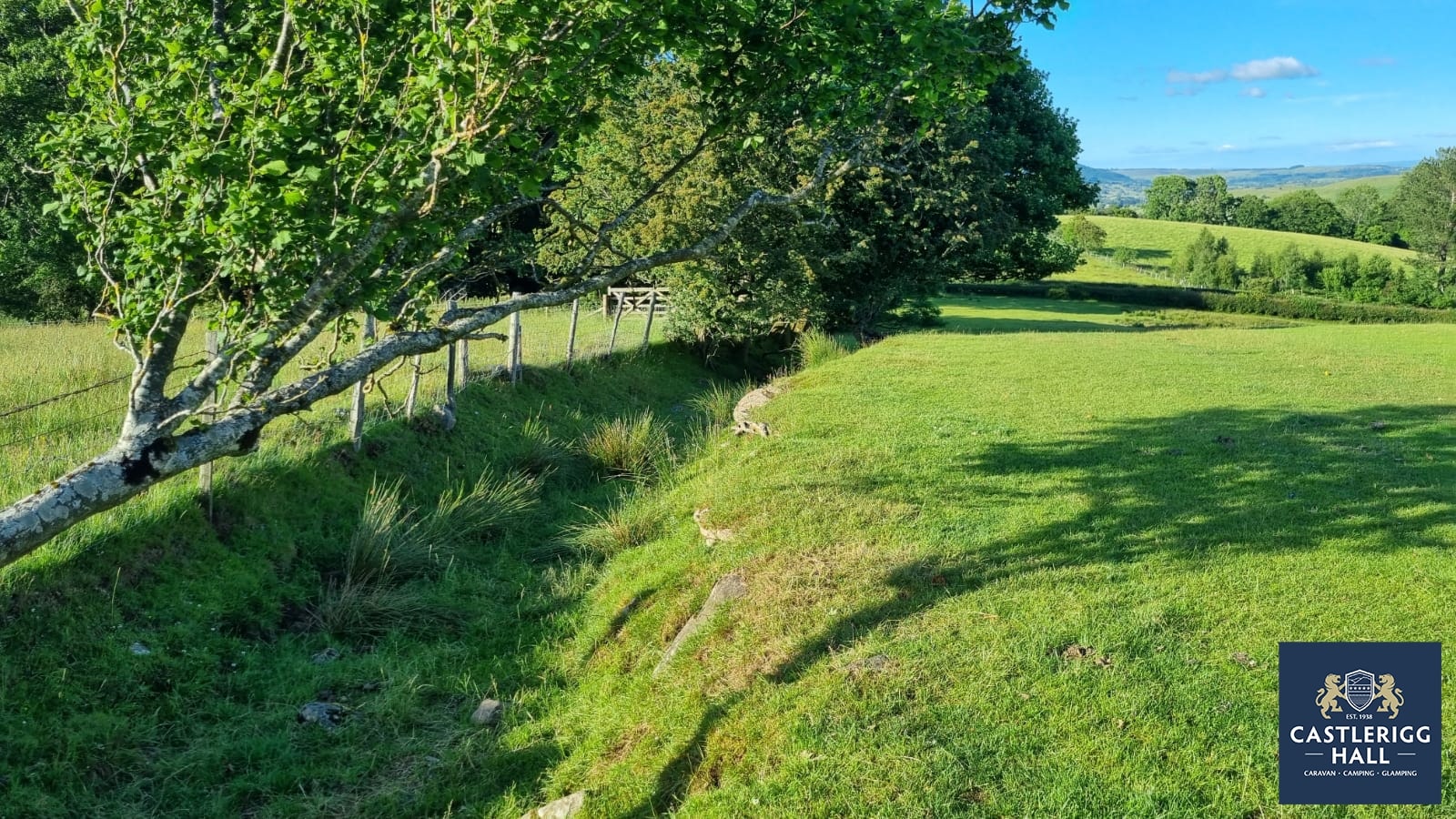 If you have any ideas for why this could be, please do drop us a message to let us know and put an end to this decades’ long mystery!

The kissing gate just before the A591 road

6. Keep following the path towards the A591. You’ll have to pass through a kissing gate to get to the road, so if you’re with a loved one it’s traditional to give them a kiss at the gate. If there’s only sheep around, you can give this tradition a pass 😂 Then cross the road, keeping your dogs and kids under control because the traffic goes very quickly here. 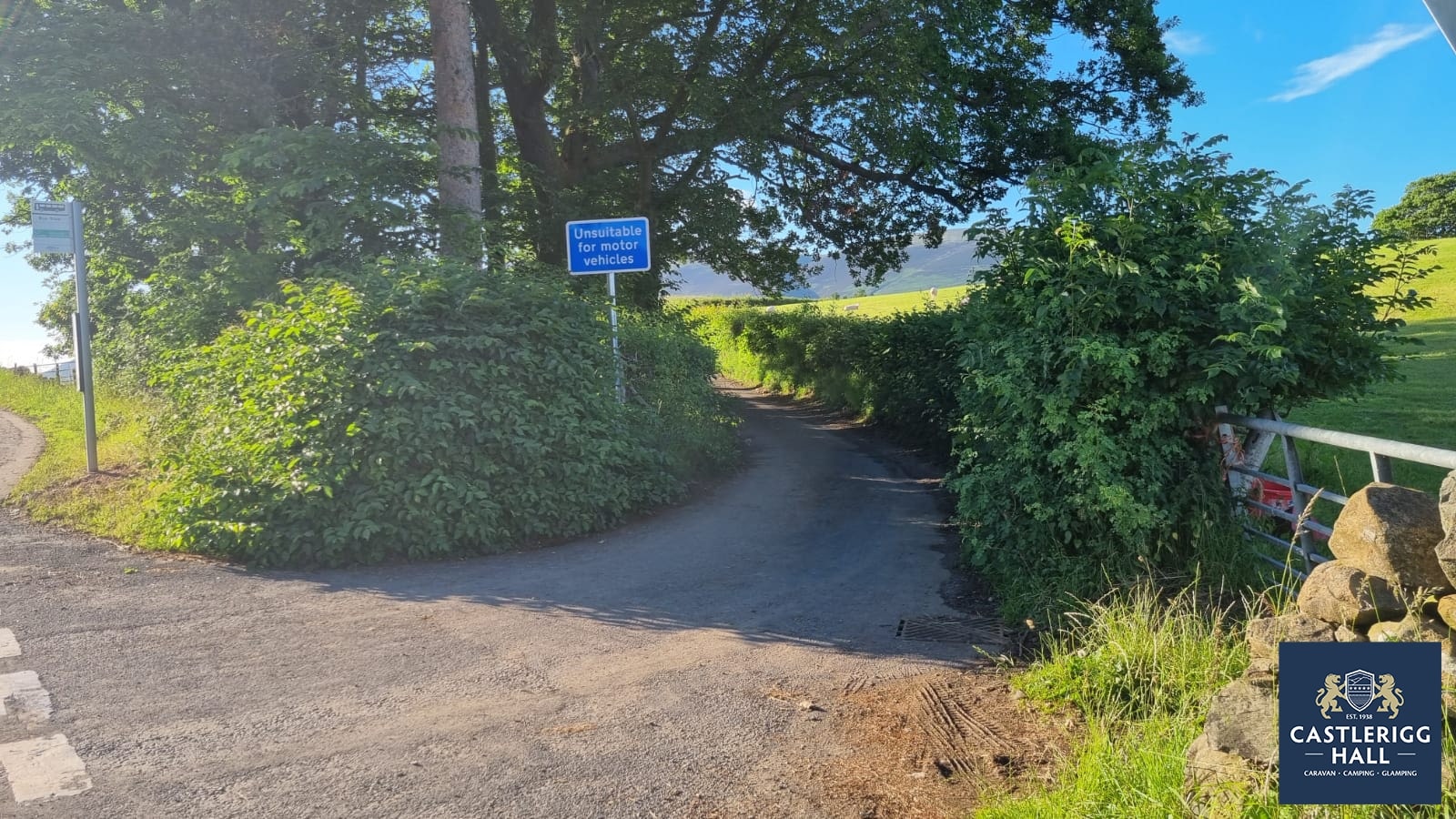 7. Head along the country lane pictured above called Castle Lane (us locals call it Mile Lonning, despite it not being a mile!). You’ll follow this lane all the way to the Stone Circle. Keep an eye out for Bassenthwaite Lake on the far left.

David’s notes: Castle Lane was in fact once a Roman road and there was even a Roman Fort at this site! You can read more about that recent discovery here: Roman Fort Discovered at Castlerigg

Though there are no signs of anything nowadays, it shows the strategic importance of Castlerigg for generations throughout the centuries. From the late stone age, to the Romans, to modern campsites. 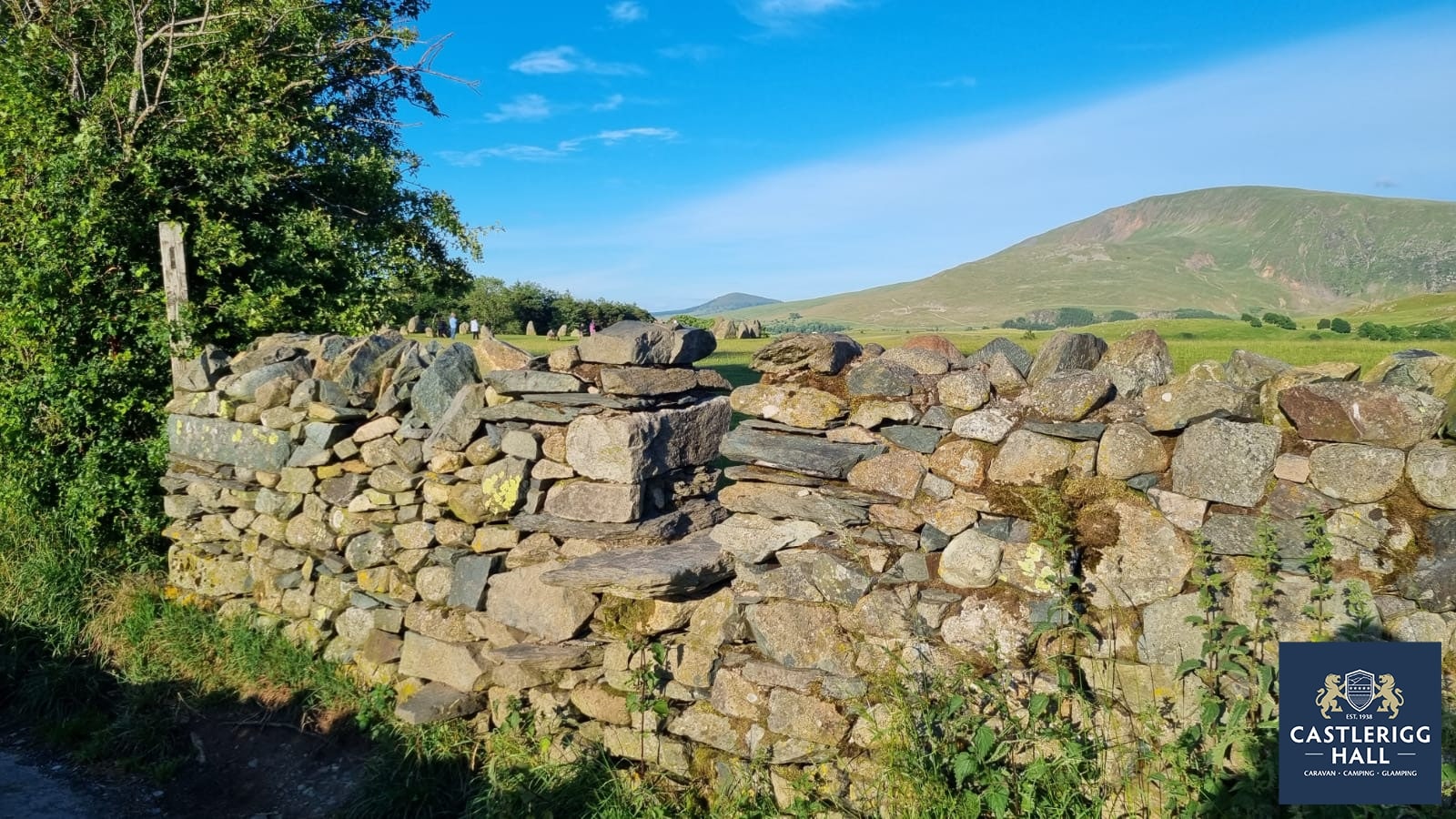 Cross this stile to get to Castlerigg Stone Circle

8. Once you have walked up most of Castle Lane, keep an eye out for a slate stile on your right. Hop over this stile and you’ve arrived at Castlerigg Stone Circle.

Part 2: What to see at Castlerigg Stone Circle 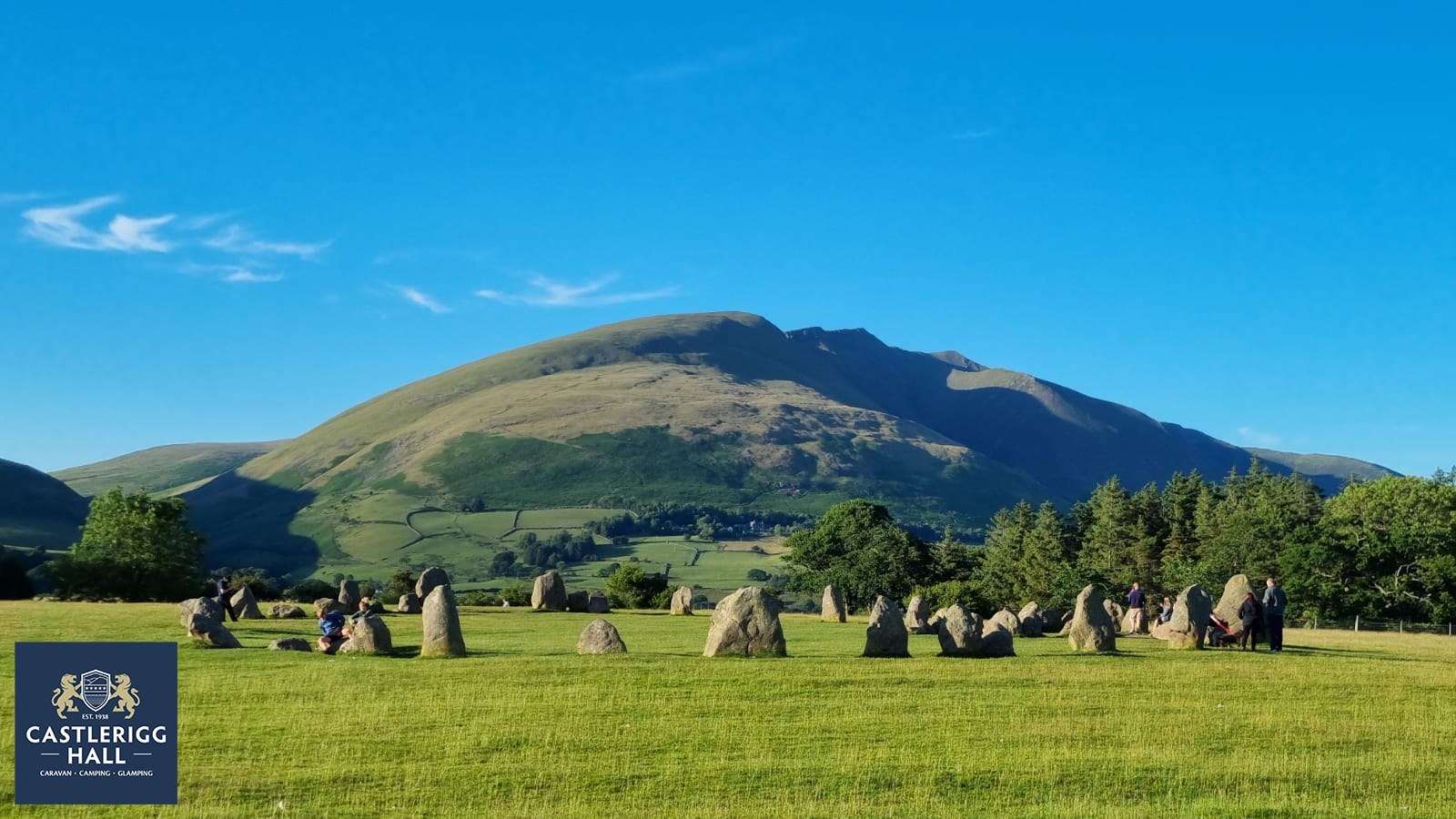 The Castlerigg Stone Circle with Blencathra behind it

Welcome to the Castlerigg Stone Circle!

Like many similar sites around Great Britain, the Castlerigg Stone Circle is shrouded in mystery. But whilst its use and construction methods are unknown, modern technology has allowed it to be dated back to towards the end of the stone age/the beginning of the bronze age, making it one of the country’s oldest stone circles.

David’s Notes: I often wonder, why was the circle positioned where it is? During the longest day the sun sets behind the mountains of Latrigg and Skiddaw, was there a marker on the fell? I wonder why it wasn’t built further along the rigg where you get a better outlook towards Bassenthwaite. Perhaps, like Stone Henge, there was some sort of long ceremonial avenue along the rigg or the level ground where it sits was more suited.

This also prompts the question of where did the ancient Neolithic people who constructed and used the circle live? Presumably on the high ground or Castlerigg Fell as lower down much of the valley would be flooded. There are a few springs near the Stone Circle but these dry up in dry summers so a reliable water supply for the people must have been close by to their homes. Perhaps Brockle Beck played an important role? So many questions which we may never know the answers to… 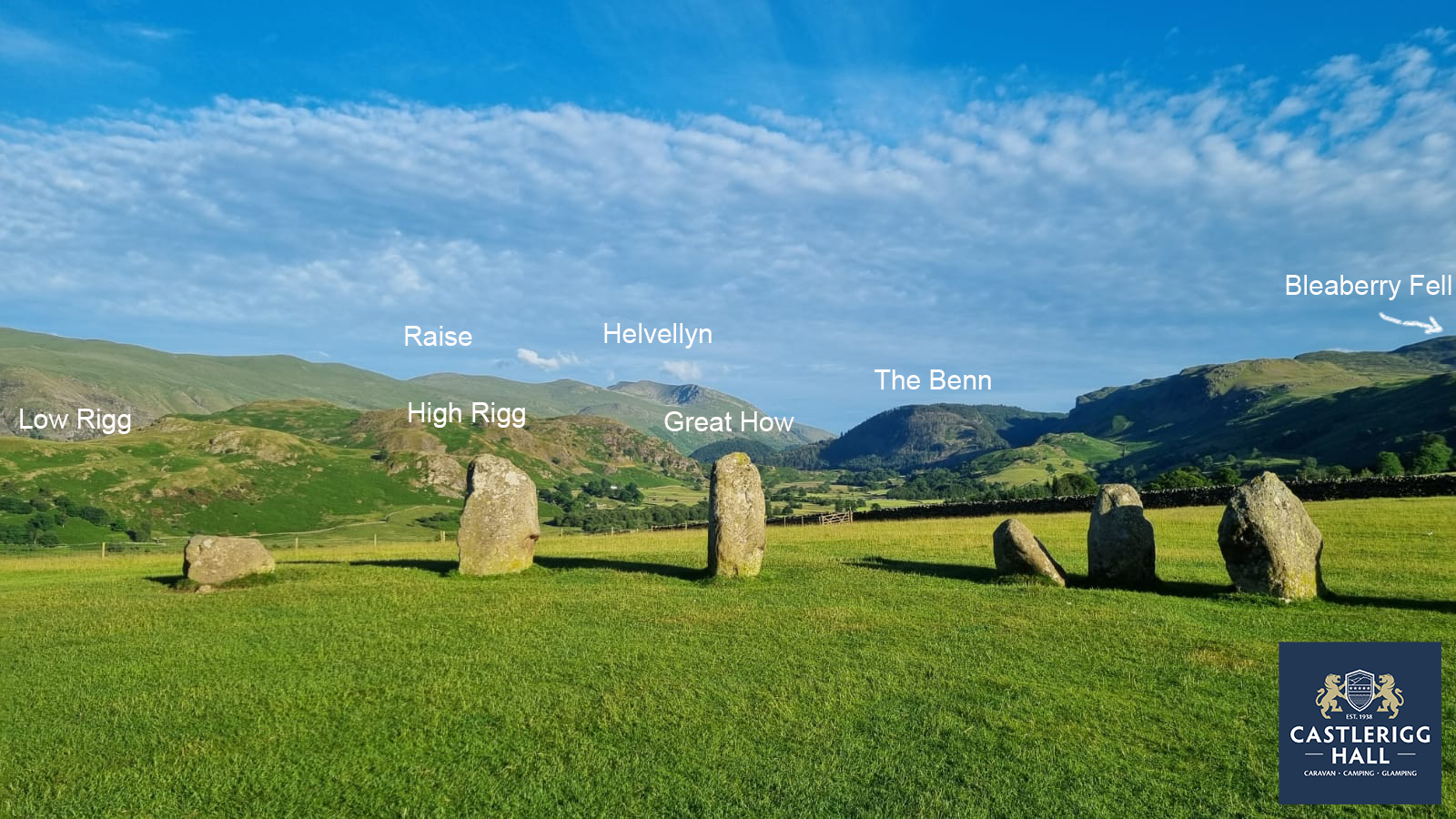 Want to identify the fells and mountains you can see from the Castlerigg Stone Circle? Start by finding Blencathra and beginning to turn clockwise to spot little Mell Fell,  then Helvellyn, right the way around to Bleaberry Fell and Walla Crag.

Continuing around, you’ll then be looking across to the western fells including Catbells, Causey Pike, Grizedale Pike, and back around to Skiddaw and Blencathra.

Part 3: The route back to Castlerigg Hall

When you’re ready to leave, you can either retrace your steps or take the slightly longer circular route back with the directions below. (I always agree with Wainwright that it’s always more interesting to do a circular route than a linear one). 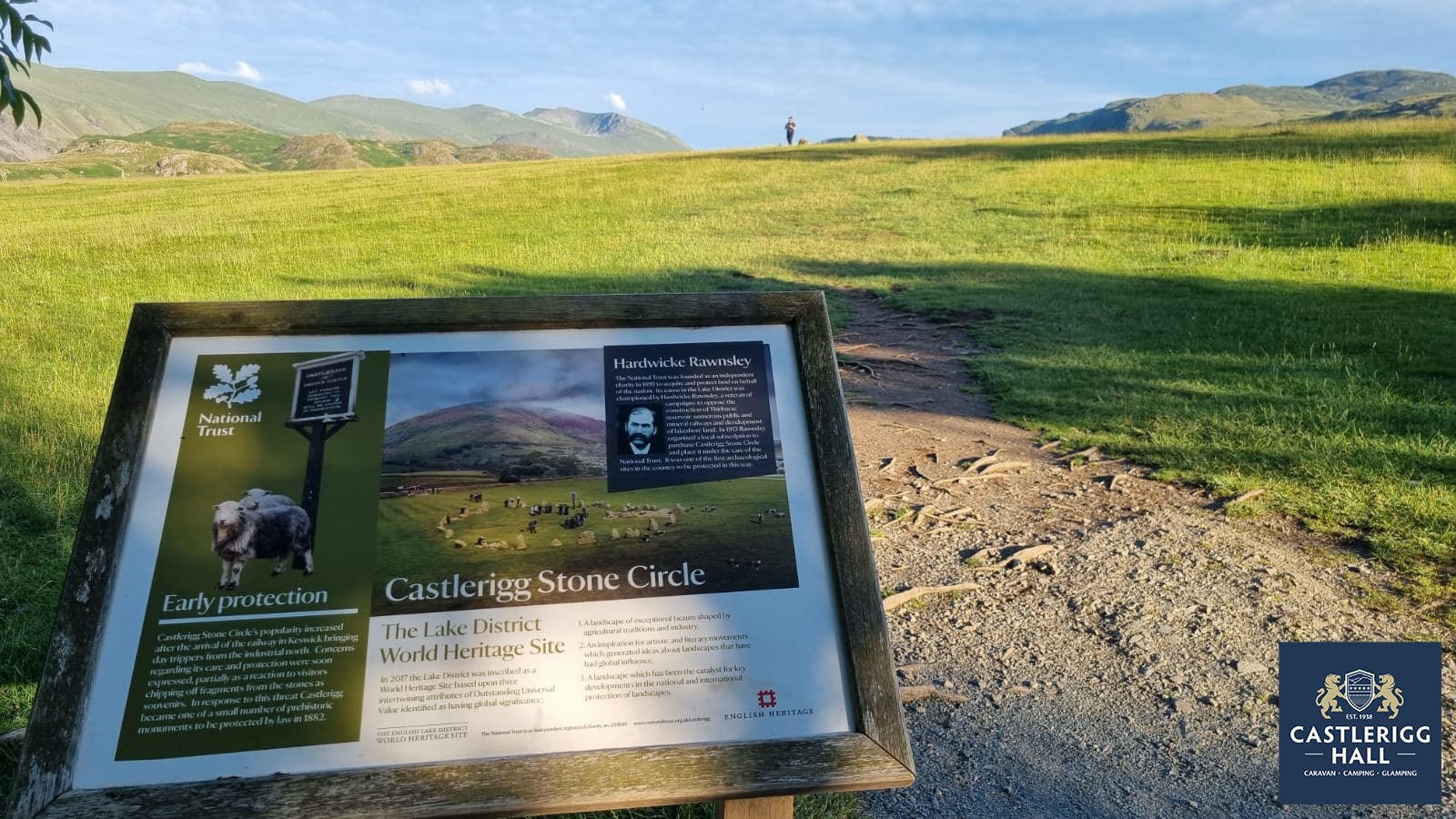 9.  Head out of the field via one of the 3 gates to the parking area.

David’s Notes: It’s worth visiting each gate because they all have artist’s interpretations of what the Stone Circle may have looked like thousands of years ago. 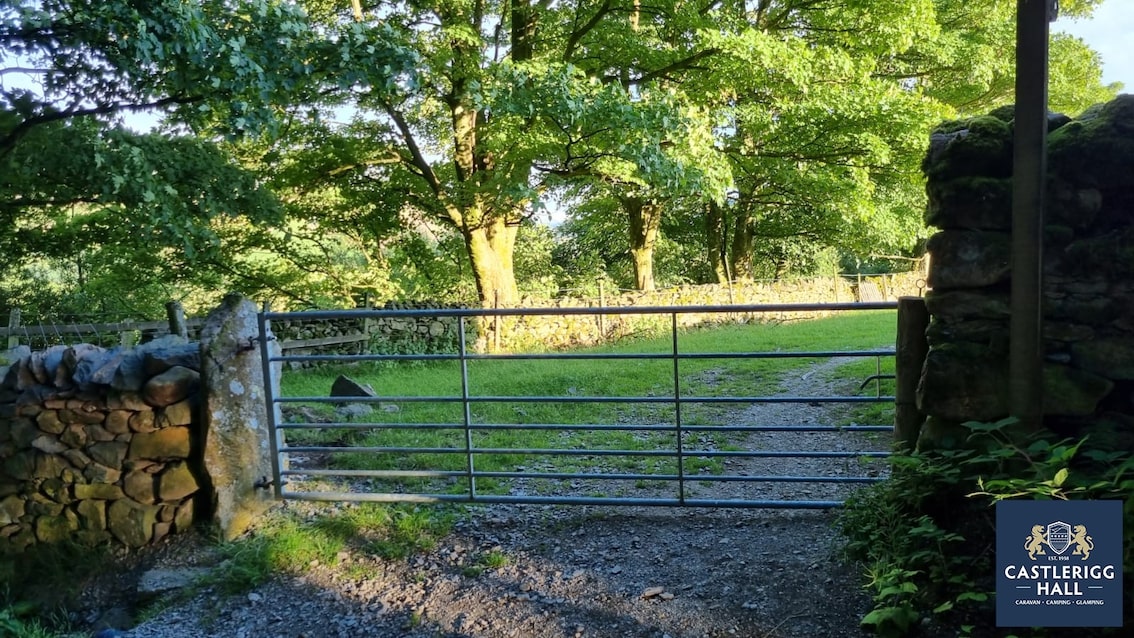 10. Follow the road down in the direction of Goosewell Farm and take the first gate on the right (which has a sign which says ‘High Nest’).

A lovely view over the Naddle Valley in the golden hour

11.  Head through a rather narrow field. Please note, this section of the walk can get quite soggy so if it’s been raining a lot recently, don’t wear your best trainers on the walk. Then, continue to make your way through the next few fields.

David’s notes: You’ll have views of the majestic Naddle Valley, which has many beautiful walks to enjoy as well. In the distance (to the right of Helvellyn) you can see the wooded  Castle Crag which contains the remains of an iron age fort. 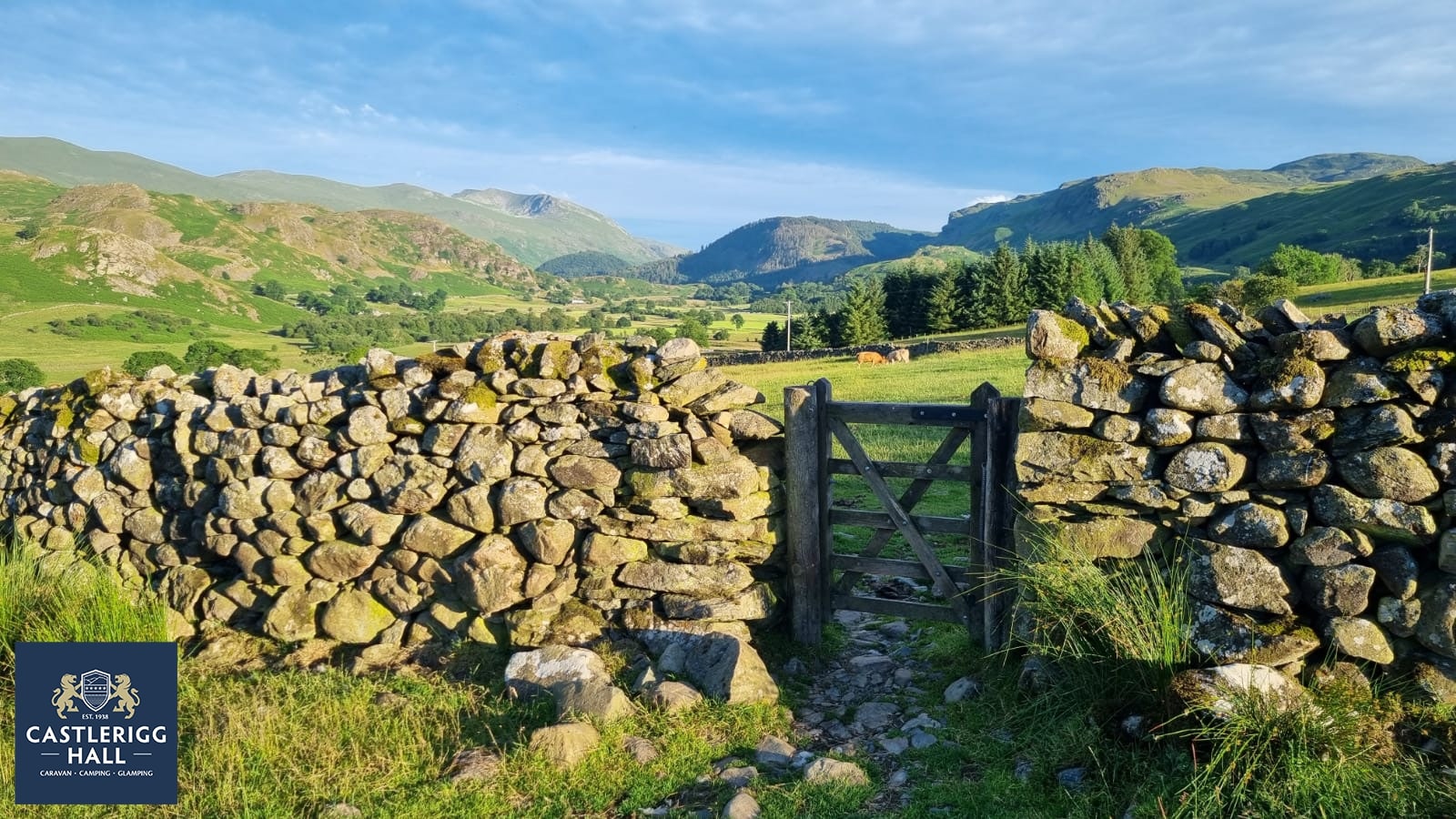 The small gateway to go through

12. When you get to the small gate pictured above, go through it and close behind you. Cattle may be in this field and other animals, so make sure you stay away from them. Stick to the same path and continue.

David’s Notes: Beneath your feet is a modern tunnel completed in 2020 which is part of a pipeline to carry water from Thirlmere reservoir to West Cumbria. 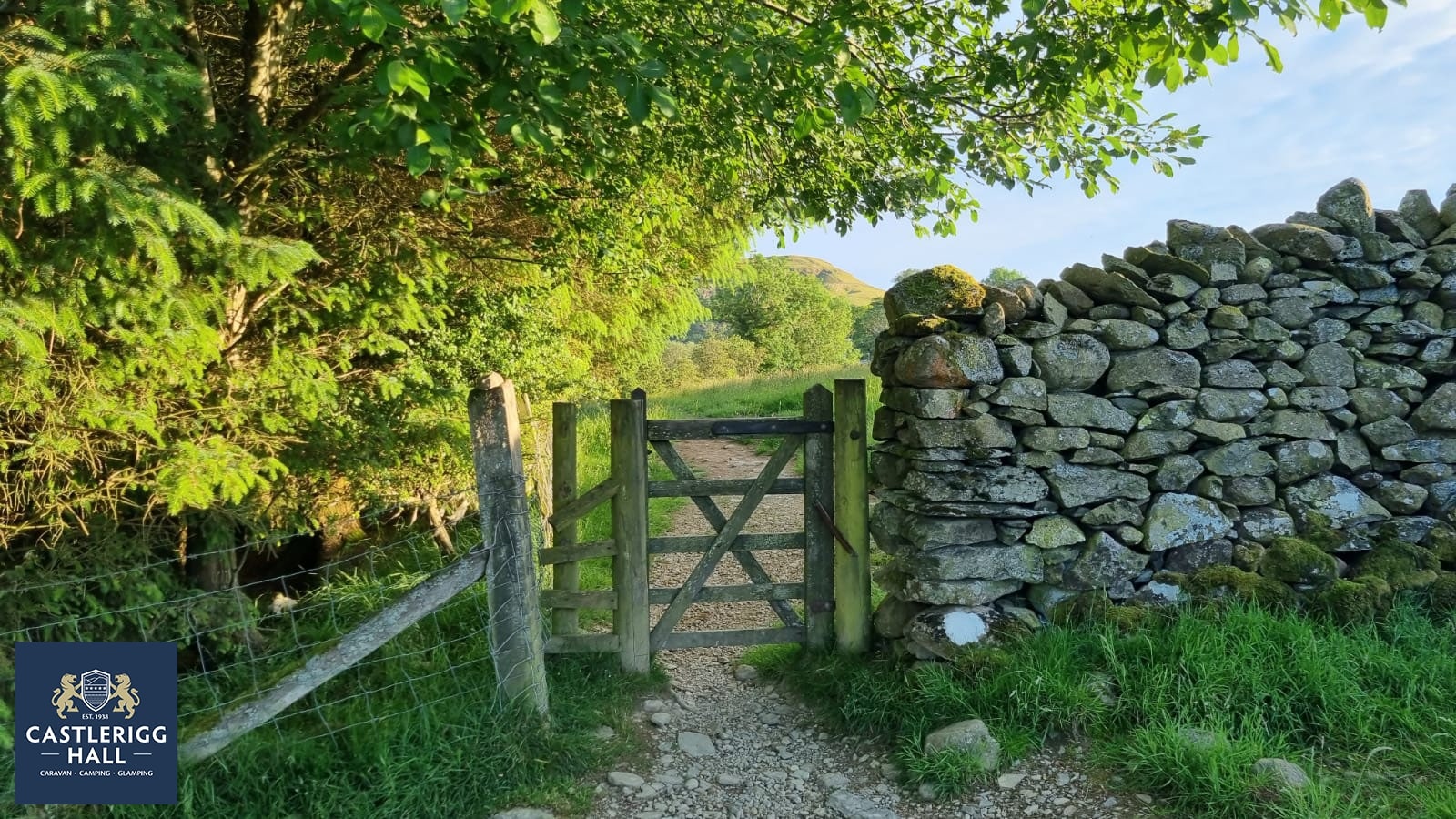 The gate in the corner of the plantation, heading towards High Nest farm.

13. Continue to follow the path towards a small gate on the corner of the plantation towards High Nest farm. 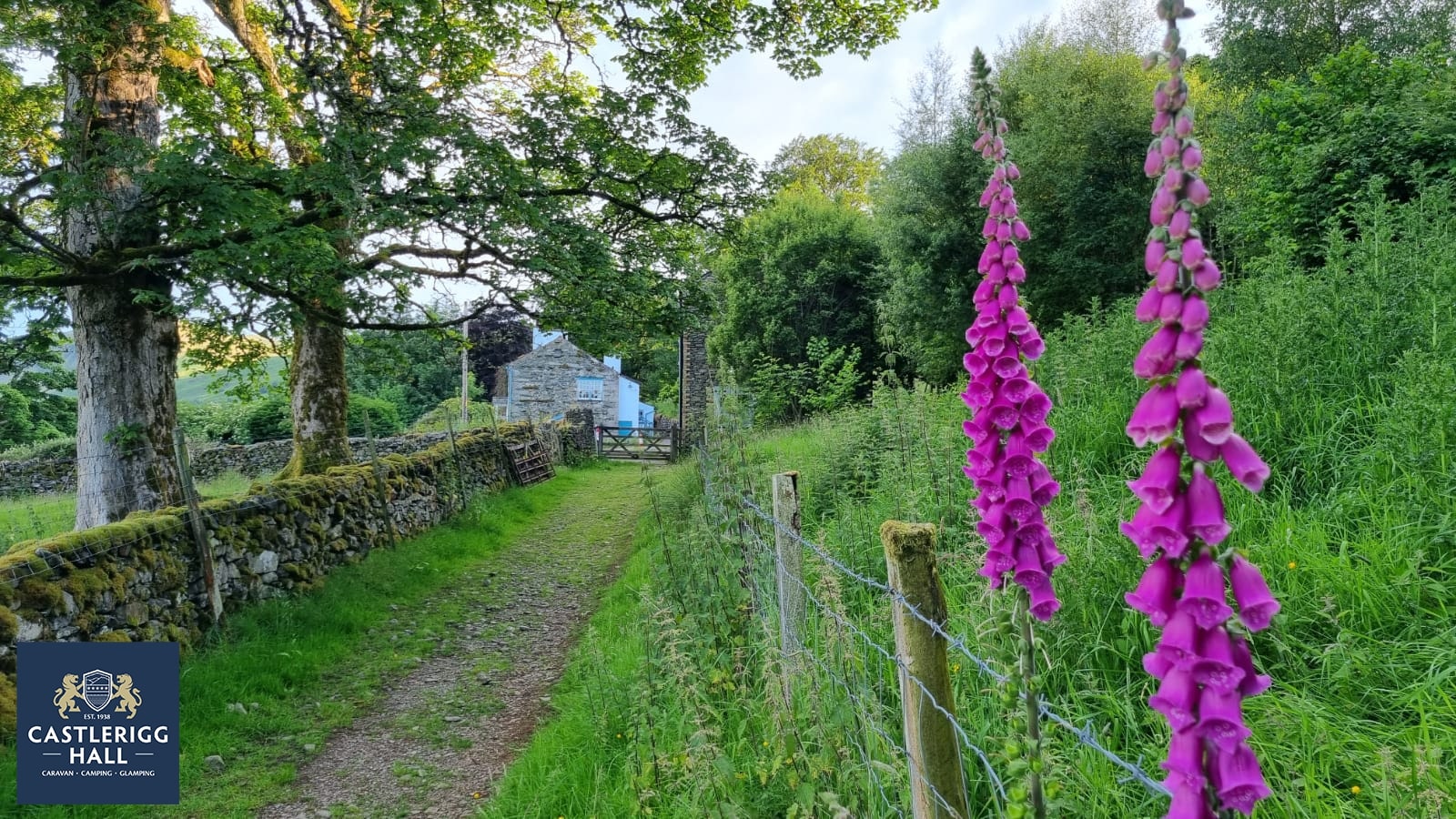 The foxgloves by High Nest farm

14. Walk along the side of the plantation through the field and go through the gate past the High Nest Farm cottages. We’re on the approach to the A591 again. 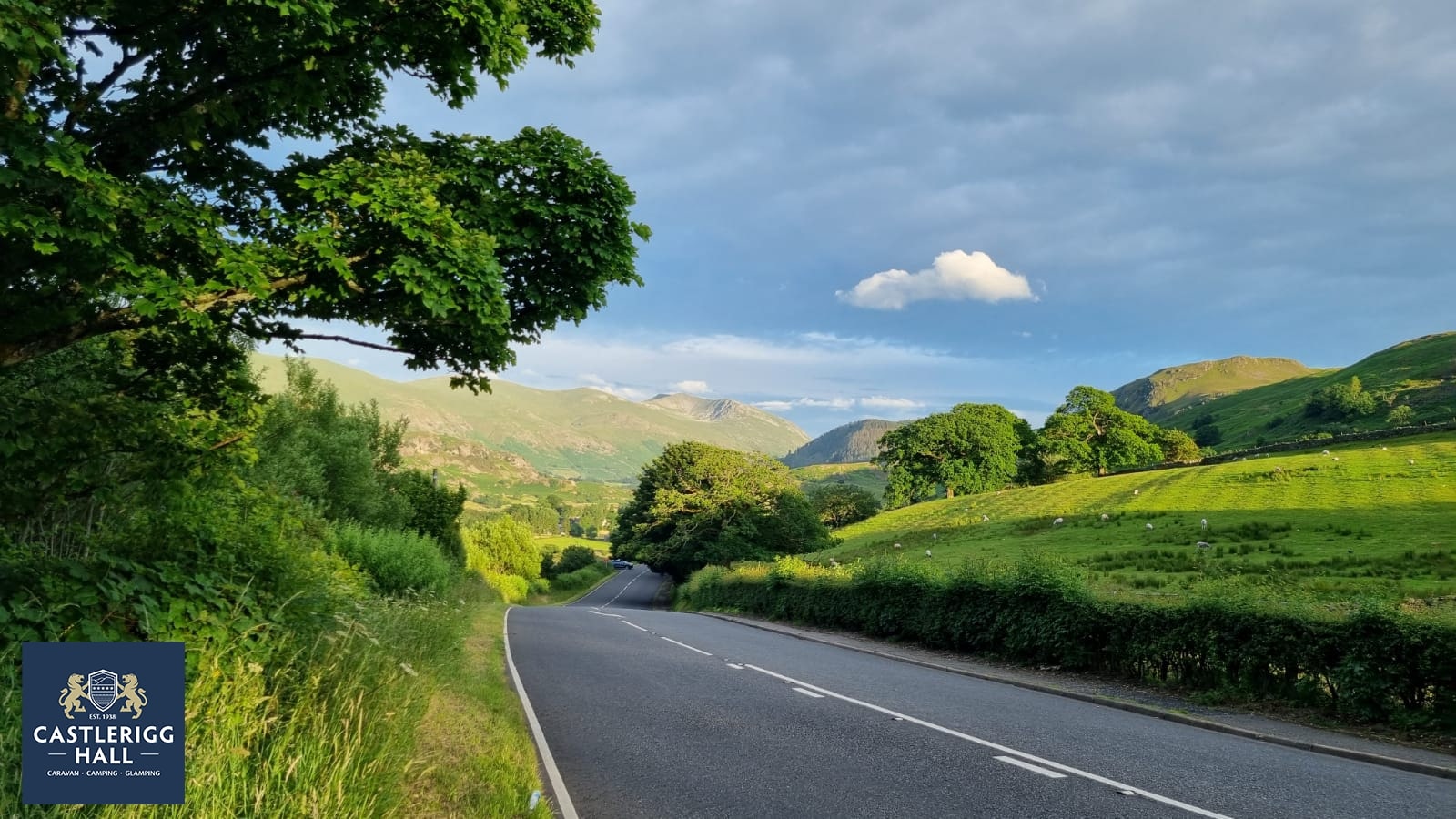 15. When you get to the road you’ll need to cross to walk along the pavement. Then, turn right and follow the pavement back to where we crossed earlier. 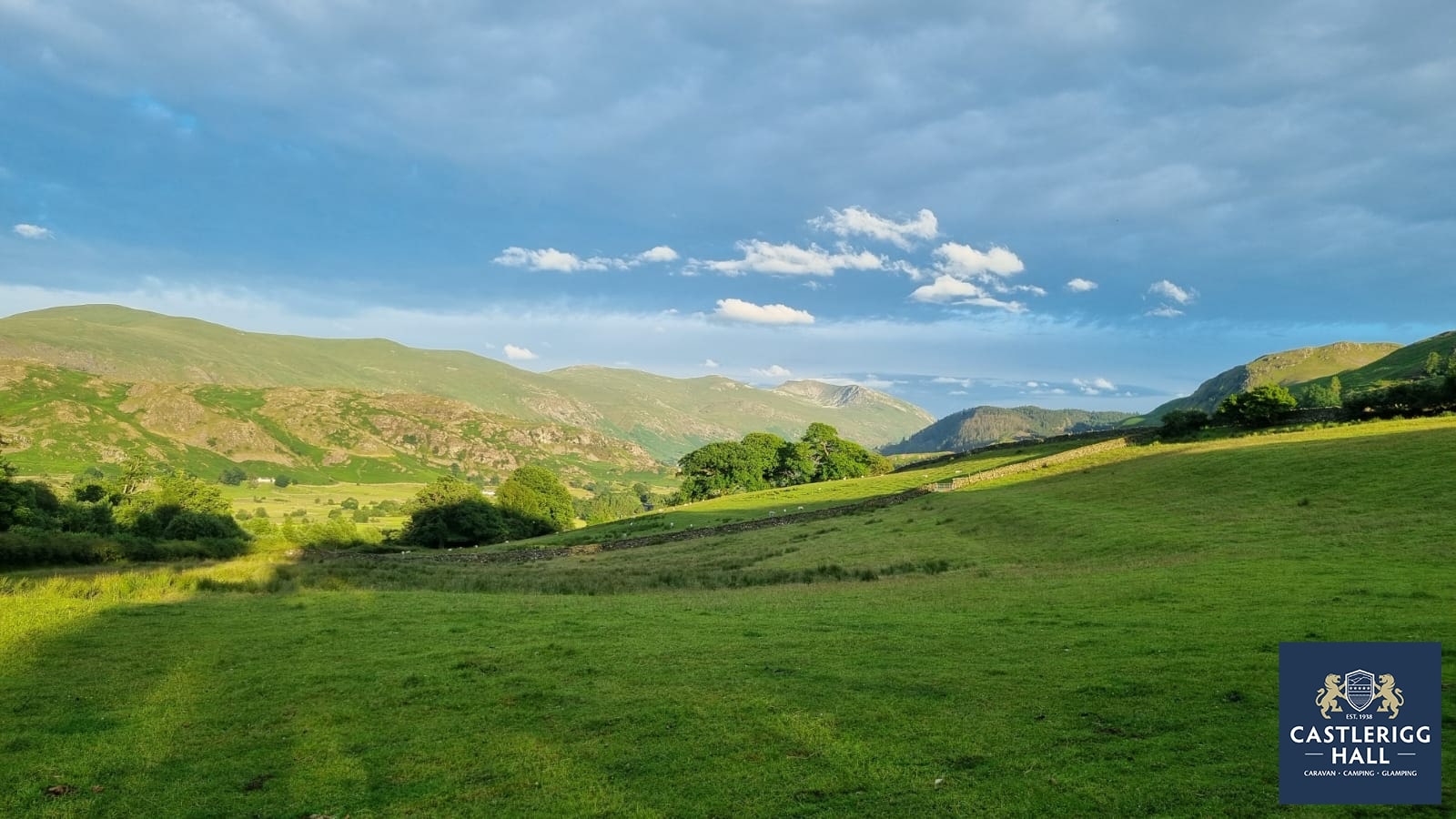 16. At this point if you don’t want to retrace any of your steps, carry on following the A591 pavement for ¼ of a mile until you come to the Castlerigg Hall lane end which you can turn left up to head back to the park. On this occasion, we’re going back through the kissing gate to retrace steps to head back to the holiday park. You’ve arrived back at Castlerigg Hall Caravan, Camping and Glamping Site! Time for cuppa tea or maybe a pint!

Visiting the Castlerigg Stone Circle is at the top of many ‘Best Things to Do in the Lakes’ lists for a good reason. Hopefully, these pictures and trail directions have given you a hint of the beauty of this area.

It’s a lovely walk to do from Castlerigg Hall which shouldn’t be too tiring or particularly difficult as the elevation is minimal and it’s primarily walking through fields, paths or lanes.

For guests of the holiday park, my recommendation is to enjoy this walk on a sunny evening. The lighting is beautiful, there are fewer tourists around and it’s a great way to top off a busy day in the Lakes. If you’re visiting in colder months, the Castlerigg Stone Circle walk is also absolutely stunning in the snow!

Check out our other walk guides:

Inspired to go walking in the Lakes? Why not treat yourself to a Lake District getaway at Castlerigg Hall. Check out our wide range of glamping accommodation:

You have Successfully Subscribed!